In San'in Kaigan Geopark, valuable and beautiful geology and topography such as diverse rocks and geological strata, diverse coastal topography, waterfalls and valleys are waiting for you to explore.

（6）Active faults and coastal terraces, reflecting Quaternary crustal movement, found along the coast of the Sea of Japan

A hill-shaped terrain formed by the accumulation of sand carried by the wind. As the sand flows due to the wind, it forms various micro-topography. It is used as cultivation for Chinese shallot in Tottori and watermelons and melons in Kyotango. The well-drained soil peculiar to the sand dunes is suitable for growing root vegetables.

Sand or coarse sediments carried by the flow of water or the wind are shaped like blocking the mouth of the bay.

A bay closed by development of sandbars. Since flat land is formed on the sandbar and around the lagoon, it tends to be used as a settlement.(Kumihama bay Kyotango city and others, Takeno Toyooka city, Hamasaka Shin'onsencho, Koyama Tottori and others)

The cliff formed by the erosion of waves is called Sea cliff, and the flat terrain formed on the bottom of the Sea cliff is Wave cut terrace. The almost flat ledge in the intertidal zone is called the wave-cut platform. The large wave-cut platform is used not only as a place for rocky shore play, but also as a fishing ground for picking seaweed.

A hole made carving rock by wave. The one that penetrates rock is called Cave gate. There are also tours passing through the cave gate by sightseeing boat, sea taxi, canoe, etc., and it must be one of the reasons why marine tours are popular in San'in Kaigan Geopark is that various cave gates and coastal topography can be seen.

A flat surface (wave cut platform) exposed on land after erosion on beach by wave. The bottom of the sea appears on the surface above sea level when the sea level drops or the ground rises due to an earthquake or tectonic movement. The flat land that stretches along the coastline is used for various purposes such as settlements and paddy fields.

Topography created by the phenomenon of underground magma erupting to the surface of the earth. The shape of the volcanic body differs depending on chemical composition of magma and type of eruption.

Columnar fissures formed when lava cools and consolidated. "Joint" refers to a crack in rock, and columnar joint refers to columnar shape joint in particular. The reason why pentagonal and hexagonal shapes are common for joints of lava is that these are the most suitable shape for efficient cooling and shrinkage, and hexagonal aggregates are common not only joints but there many in nature such as snowflakes and beehives.

A gentle land with a higher altitude than the surrounding area. Due to the cool climate even in summer, cultivation of highland vegetables such as cabbage in Kannabe highlands and radish in Hataganaru highlands.

Paddy fields created in steps on slopes such as mountain slopes and valleys. This is a type of agriculture land often found in Japan where most of the land is covered by mountainous topography.

A plane of fracture in rock, which normally shows displacement between both side of it. It often appears on the surface of the earth due to earthquakes, and the Gomura fault (1927, North Tango earthquake), Tai fault (1925, Kita Tajima earthquake), Shikano fault (1943 Tottori earthquake), etc. are preserved as records of earthquake. 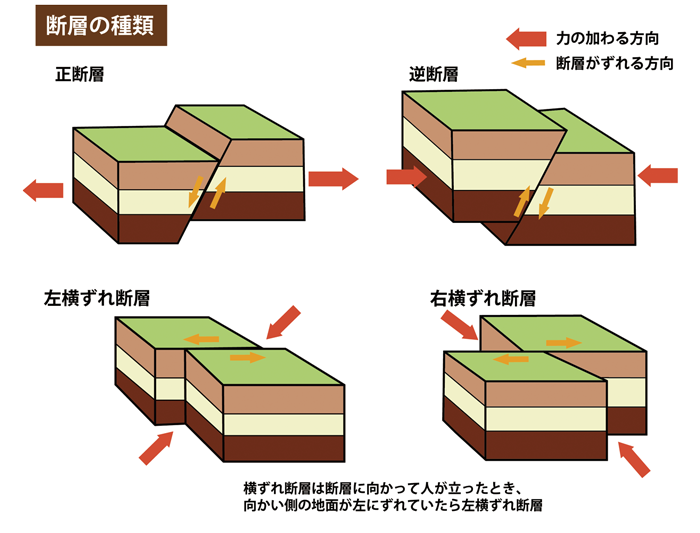 The flow of a river falling down a steep cliff.

Topography of the valley between the mountains.